The Chinese “barbecue” was not settling well. Jessica’s food wasn’t either, so I didn’t anticipate seeing her for a few hours. While it wasn’t the best choice I could have made for dinner, however, you can’t argue with results…

The bar door downstairs was closed, though, because there was a band playing and a cover charge. Little did I know that because I was staying in the hostel, I could have gotten in free, but my ignorance launched me into the cool Toronto night with no destination and a thirst for alcohol. 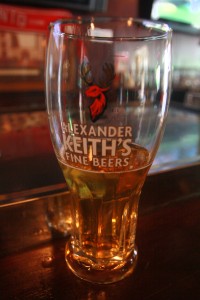 Don’t know what to ask for at a pub in Canada? Saying “Keith’s” can almost convince them you’re a local.

I walked toward the large buildings I hadn’t visited, but was distracted by a glowing sign for The Globe and Mail. I fantasized about walking by and peering up into the windows and catching a few journalists burning the latenight oil.

No such luck and I found myself in the middle of nowhere. I shot up a side street back toward…whatever road I had been near before I guess. (King Street. I just looked it up)

Then I looked to my right and there was a bar called The Banknote. It was more like a lounge, really. I walked in and the only person younger than 30 was the feller on guitar who was plucking away at a cover of Superstitious.

I had a beer. (By now I had grown accustomed to asking for “Keith’s” and accepting whatever glass I received next). I looked up at the television screen which showed the N.C. State Sweet Sixteen basketball game would be on TBS and starting shortly.

Looking around I determined this wasn’t the place I wanted to set up shop to watch American collegiate basketball, so I decided there had to be a sports bar nearby. And if not, I would just go back to the hostel and grab Jessica.

And then I saw it. Across the street, as if formed from my imagination, was a sports bar with a banner sign that said “Watch the game here.”

I approached the side entrance where two women dressed in black were crowding the stairwell.

The one in the black fedora noticed first that they were in my way and apologized, but I admitted I was prepping to show them my ID, since they looked like they were guarding the entrance.

The blonde affirmed that was the case and asked for an $80 cover. Right away I liked these two. Cracking wise with me and asking for a fee too outrageous to be true but too specific to be completely made up … a perfect ribbing.

I went inside and sat at the bar with two seats available beside me. Every single one of the 37ish flat screen televisions in the bar (I was told later it was The Wheat Sheaf, though I never knew it while I was there) was tuned to the Kentucky v. Indiana game so I asked for one, the one in front of me, to be turned to the State game.

The bartender obliged and I began my tab, but noticed the “bouncers” had found a table away from me. I asked Ms. Fedora to join me at the bar and they came when Ms. Blonde returned from the bathroom.

I told them where I was from and why the game mattered so much and they weren’t impressed.

“You should see Hockey Night in Canada,” Ms. Fedora said.

Whatever. I stood in my chair and nearly ripped my hair out as Kansas managed to edge us by three that night.

The conversation ebbed and flowed between horribly inappropriate subjects and normal bar talk, but by the end Ms. Blonde had left and Ms. Fedora had revealed she was actually Mrs. Fedora.

We made plans to meet to experience Hockey Night in Canada the next night, which, it turns out, is a thing, and I walked back to the hostel with the intentions of rousing Jessica and pushing deeper into the night, but between Chinatown and BBO, it wasn’t worth it. We got a good night’s rest to prepare for day three.

The third day proved to be a hike. We had places to see that had not yet been seen and this was our last shot.

At twilight, though, we were walking to the Loose Moose to catch a hockey game with Mrs. Fedora.

We stiffed a bad waiter and joined her at the bar, where all of Toronto watched while the Maple Leafs delivered the hockey equivalent of a three-point loss –an uninspired shootout loss.

The tequila and lime shots were more bitter than usual following that loss and Jessica was pretty bad off after she followed up Hops and Robbers with Molson Canadian. (Which, it appears, is Canada’s PBR. It tastes fine. Good even, if you have an open mind. But people still raise an eyebrow like you’re either a hipster weirdo or a classy redneck. For reference, however, I was told more than once that I should try Shock Top, a beer I only drink when I’m sick of domestic bottles at Camden Yards.)

Anyway, I don’t think she particularly remembers when Mrs. Fedora took us to her favorite pub, where I lost an American dollar to her Canadian coin when Colorado lost to Vancouver while we waited for Jessica to recover. I also drank a massive Carlsburg while we were there.

Jessica bounced back, though. We didn’t go dancing like she had drunkenly suggested, but she did manage to walk back to the hostel on her own.

And so it is that bad barbecue played a part in me making a Canadian friend who has floated the idea of visiting North Carolina this fall.

I’ll be sure to take her to Parker’s while she’s here.