I recently followed up on a candidate for City Council who put down two separate addresses on his voter registration form.

One was the address at his recently purchased home in the district he was aiming to represent. The other was his work address.

I did due diligence, especially since I knew he was living out of district very recently, but N.C. laws concerning residency are very ambiguous. A formal challenge to his residency filed by a resident fell flat, as well, mostly because the challenger didn’t appear to read my stories, but to make a long story short, the young man is still on the July 17 ballot.

I know the guy well since he’s one of the young professionals in the area and we’ve shared quite a few beers before and since his candidacy. He’s a nice enough guy, but the story isn’t about him or his candidacy. Like nearly everything on this blog, this story is about me.

I had just arrived in Canada and it was 12:01 a.m. when I received a text message from the candidate whose campaign I had nearly stamped out.

I remember thinking “Goddammit Kyle, you’ve got to learn. You cannot drunk text the city government reporter when you’re running for city council.”

His text was short “Rum diary.”

“What the fuck?” I thought.

A week or so later, back in the states, I saw him at the pub again and he brought up the text.

It turns out he had seen the movie and liked it so much he had watched it three days in a row and that the main character reminded him of me.

Coming from a city council candidate who I had nearly ruined, that was awesome. Comparing me to any Johnny Depp character in the Caribbean is quite an honor. To a Johnny Depp character thought up by Hunter S. Thompson about an alcoholic enterprising writer with a hatred for “bastards” and corruption – good God that’s an ego boost.

Back when I was in elementary school, kindergarten through 6th grade was held at the former Rosewood School, which used to house all 12 grades. The building is so old, they don’t even know how old it is, although estimates are that it was built sometime in the 1920s.

Anyway, the county decided to build a new elementary school just as I was finishing up 5th grade. The old building was to become the middle school and just like that, instead of being the big kids on campus, we were once more at the bottom of the totem pole and in the exact same decrepit building, no less.

Some of my friends at least got a year in the new elementary school (they had a zipline on the playground!) but for me, the most I was there was when my little sister was attending.

Regardless, there was a phone call a month ago from Rosewood Elementary (the “new” one) because they wanted someone for their career day. Needless to say, I volunteered extremely quickly.

I got 30 minutes with 10 different classes, explaining how newspapers were made, what journalism is and whatever else the kids asked. (How long have you been growing your beard? was one such gem)

“Journalists tell stories.” Just like calling on someone in class gave them additional sharing power, I explained, having a newspaper meant information could be disseminated to the masses even more. Instead of having two dozen captive schoolchildren, though, I have a newspaper that is delivered to about 20,000 people.

“Newspapers are grown-up show and tell.” Photographs show you what happened. Stories tell you. It’s really as simple as that.

Since I spoke there, I’ve had autograph requests and had a half dozen of those kids point me out to their parents, but the great reward came in the mail.

Here’s what the letters said: 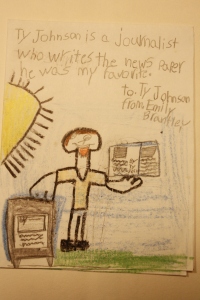 (cover) “Thank You For Coming to Career DAY”
(inside) “Dear Mr Ty Johnson,
Thank you for coming to are school for career day. You teached me a lot of things. I really loved the part when  you passed around that blue print of the paepr that you copy to make the paper. You got my intrest so much that I think I am going to be a reporter when I grow up for the paper. I really enjoyed what you teached us. Thanks alot.

I also got a letter from one of the teachers who taught me. I was in her first class and, ironically, first cut out articles from the News-Argus for current events assignments.

But, in true Ty Johnson-fashion, the letters weren’t all normal. One was from my sister’s ex-boyfriend’s little sister who is adorable, but she still led with “my brother Scott used to date [your sister].” Then there was this one, which had a picture of a green airplane on the cover and began like this:

“Holy shit,” I thought. Did some poor mother, when pressured about her bastard son’s real dad, just point to the newspaper in a Barney Stinson/Bob Barker incident?

Of course the letter continued and it turns out he was referring to a father who must be in aviation, but it was quite a rush.

I returned to one class in particular last week and one kid saw me coming from through the door and yelled “TY JOHNSON!”

I passed out business cards (the most I can do for them) and told them to give me a call if they have any news tips.

None yet, but I can’t wait.