I hadn’t seen Farrell or Jessica since I returned from Canada more than a month before, I was halfway through a pint of beer and talking with Farressica, Farrell’s dad and Zachary Tubb at Lilly’s Pizza on Glenwood Avenue.

And where was I? I was on the sidewalk, near some dumpsters, struggling to hear what was being said on the other line.

The beer was calling to me. And the pizza. But someone else had called, too and she was telling me all about her assignment.

The story was riveting, but I caught myself thinking about how badly I wanted to get back to the table. I fought it for several minutes, but I was ready to return to my beer.

And then there it was: a white convertible Mazda Miata.

It pulled up to the curb, but for whatever reason didn’t pull up into the definitive parking space behind a white Suburban.

The boy in the driver’s seat attempted to crank the car again, but it stalled.

“Hell,” I thought, “It’s a Miata. I could throw that thing over my shoulder and carry it the 10 feet forward into its proper parking space.”

I hurried my caller off the phone and stepped behind the car just as I overheard the boy (it becomes clear why I refer to him as a boy later, but he seemed to be in his 20s) asking his girlfriend to steer the car while he pushed.

I’ll take this opportunity to voice my support for the word “man.” It is by far the most intimate pronoun any male can use to address another.

“Yeah,” I said. “Just right there, right?” I asked, pointing a few feet ahead of his roadster.

“Nah, it’s out of gas and I’m trying to make it to that gas station,” he said, pointing to a BP just over the hill.

My delay felt like the perfect amount of comedic timing, but it was truly a completely unintended pause. I would call it .75 seconds.

I looked down at my flip-flops and kicked them off to the sidewalk without a thought. This wasn’t the first time I had pushed a car barefoot down the road.

It was summer 2009 and I had just printed my first newspaper as editor-in-chief of Technician. I distinctly remember staring at Chancellor James Oblinger on the front page and freaking out at my byline as Peggy and I hurtled toward Massachusetts as fast as her CRV would take us. She was taking an internship on the Cape and I was along for the ride, helping out with the 14-hour drive before catching a game at Fenway and a plane out of Logan back to Raleigh.

We were in nowhere Connecticut, just hours away from our West Roxbury destination and I was at the wheel. We had been rotating as we filled up with gas, but something had gone screwy with our rotation during the previous switch.

I didn’t realize this, of course, until the car began to pitch and lurch a bit. Peggy asked if we were running out of gas. Clearly she knew what her car sounded like when it was on fumes.

I pulled to the side of Interstate 84 and cursed myself silently. Here I was hoping to date this girl and I couldn’t affirm my manhood in the simplest of ways: keeping track of a gasoline gauge.

She began to talk of calling AAA, but that’s not something my family subscribes to. 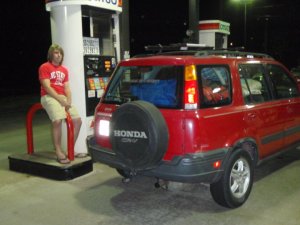 Spoiler alert: We made it. Photo by Peggy Boone

I cranked the car again and pressed on, hoping to eclipse a hill and glide to the next exit in neutral — except there was no telling how far it was to the next exit. Connecticut counts exits and miles, but the two aren’t related.

The CRV came to a rest just before the crest of the hill and Peggy again began to talk about AAA.

It was late. We were tired. AAA would have taken forever. So I kicked open the door and went to the back of the car while Peggy assumed the position behind the wheel.

I slid my flip flops off and began to push. We moved to the pinnacle of the soft hill and I went back to collect my shoes. I tossed them into the car and began pushing.

I remember the constant fear that my feet were going to strike one of the countless shards of glass that were no doubt littered across the dark highway, but I had no issues at all. For what seemed like twenty minutes, I pushed.

We picked up good enough speed to get up the exit ramp and into the gas station parking lot that was miraculously set up on the right, waiting for us. Peggy hopped out to help get it up to the gas pump, and I nearly collapsed — my lungs were filled with highway dust. 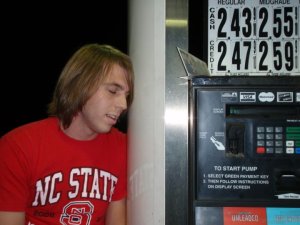 We pumped the gas and Peggy grabbed me a beverage. As we took to the road again for our last leg of the journey, the adrenaline sparked me into asking for us to be exclusive. Cliche, perhaps, but when your life imitates fairy tales, your only recourse is to play your part.

Mr. Miata was not playing his part.

His girlfriend began complaining about the lack of power steering almost immediately. We pushed and she pulled us out into traffic. We pushed past the restaurant and I took a moment to peer between the cars parked on the side of the road at my party.

They were talking about anything except for the man-powered Miata passing by.

I turned back to the task at hand, where the car was practically moving on its own.

We timed it perfectly to fly through a stoplight during its green, but that’s where the incline hit us.

My pushing partner said something about how he needed a cigarette and I laughed, thinking “How does being out of breath make you want to suck nicotine?”

But then I heard it: “Fuck it, you got it!” He then pushed off and stepped to his left, standing beneath the stop lights as I continued to push.

“Well, that’s it,” I thought. “I’m going to end up banging your girlfriend.”

When a man allows another man to push his cereal-box toy car with his girlfriend in it to the gas station, he is forfeiting some claim to his manhood.

Luckily for him, my calves cramped up, causing me to lose my ability to control my toes. I had no traction and realized I was just bounding behind the car, racing to keep my hands on it.

I managed one last thrust and watched as she directed the car across the lane and into the gas station. She pulled directly beside the pump.

He shook my hand and I walked off back to my beer.

One thought on “Feets of Strength”