I recently followed up on a candidate for City Council who put down two separate addresses on his voter registration form.

One was the address at his recently purchased home in the district he was aiming to represent. The other was his work address.

I did due diligence, especially since I knew he was living out of district very recently, but N.C. laws concerning residency are very ambiguous. A formal challenge to his residency filed by a resident fell flat, as well, mostly because the challenger didn’t appear to read my stories, but to make a long story short, the young man is still on the July 17 ballot.

I know the guy well since he’s one of the young professionals in the area and we’ve shared quite a few beers before and since his candidacy. He’s a nice enough guy, but the story isn’t about him or his candidacy. Like nearly everything on this blog, this story is about me.

I had just arrived in Canada and it was 12:01 a.m. when I received a text message from the candidate whose campaign I had nearly stamped out. END_OF_DOCUMENT_TOKEN_TO_BE_REPLACED

That’s something I don’t talk about at all outside of Tweeting about idiot classmates and professors, but it’s important to set up my most exciting moment from Friday afternoon.

So I’m majoring in history because I have a good memory and like to talk and tell stories a lot. It’s not ever going to make me any money, but that’s why I’m minoring in the highly-lucrative field of journalism.

I ended up minoring in journalism mostly because I was required to take a course in copyediting to be editor-in-chief at Technician, and I figured if I’m going to dedicate 60 hours a week so something, I may as well have a note on my transcript to insinuate that I know what I’m doing.

My women’s and gender studies minor is probably a bit surprising to most, but it came from a freshman course in family sociology that grew into an obsession with understanding people. That, combined with some history courses that counted both ways (Sexes and society in early modern Europe, to name the most impressive-sounding class I’ve ever taken) and a quick, online introductory course (A+!) gave me a minor that (hopefully) will differentiate me from pigs and misogynists and land me a job.

My final minor, however, has no connection to any of my other curricula, and that’s because it’s not something I stumbled into, but something I’m passionate about: coaching.

My father, my failure, my future 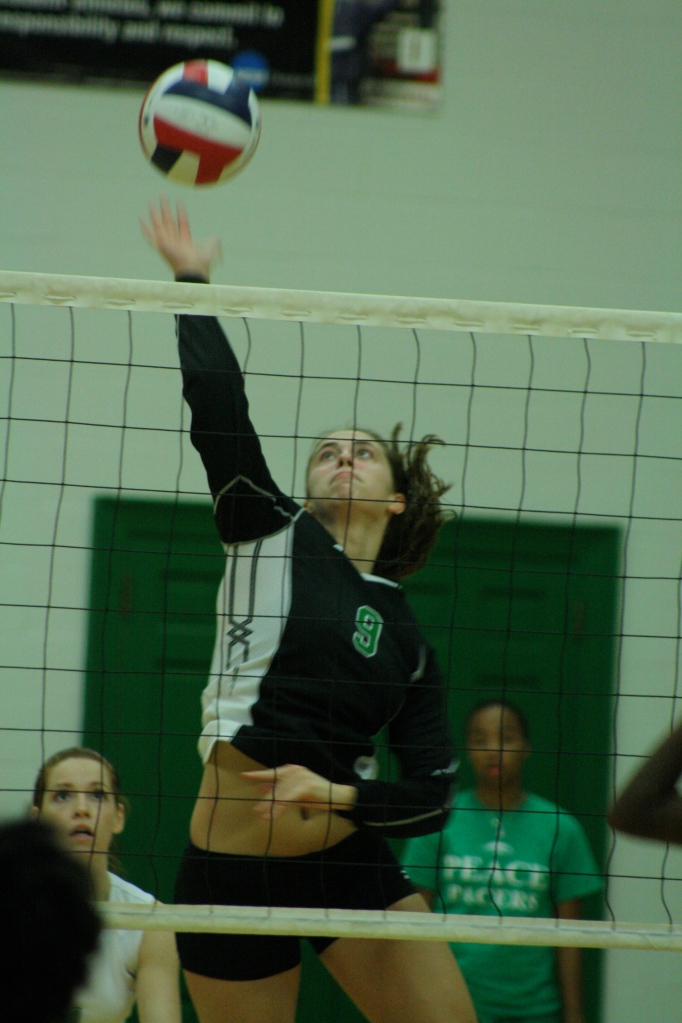 Between watching Taylor (above) play, playing intramural games twice a week and driving home to Goldsboro to coach volleyball, this entire semester has felt like one big match.

been for an idiot guidance counselor that told him he’d never find a job…but I digress.

So it was that three-year-old Ty wore a little jersey to softball games with a fraction on the back where an ordinary jersey number would be and spent springs and summers in dugouts where my mom and aunt played and my dad coached.

But it’s not a “coaching family” urge that makes me want to coach, it’s the horrible coaching experiences I had growing up.

My dad, burned out from coaching, opted to watch me from the sidelines while coach after coach ruined my potential either by oversimplifying or over-complicating skills I needed before I hit high school where the booster club kids were the starters.

Fast forward to college, where at one point I told inquisitors I was majoring in girls and intramural sports. With my WGS and coaching minors, I’m as close as you can get.

But to my anecdote…two years ago I helped my dad coach volleyball back at my old high school (he returned from coaching retirement to coach Taylor) but I was coaching and offering help to girls I had gone to school with so it was mostly just awkward.

But as my final class for my minor, I have to take part in some student-coaching, which meant a return to my alma mater for another stint at coaching volleyball.

Now that everyone I attended school with has graduated, I’m known as Ty…not Coach Ty. Definitely not Coach Johnson (That’s my father).

I’m Coach Johnson’s son, Taylor’s brother…he graduated from Rosewood…well…sometime…and he’s here when Coach Johnson isn’t here…or whenever he can make the 45-minute journey back to Goldsboro around his insane schedule that revolves around classes, beer and high school sports.

We were doing stations last Friday in advance of our state playoff opener and I was in charge of a passing drill when a girl slid on the ground to get a pass. Her kneepad had slid back and exposed her knee where the hardwood wore a sore into her knee. Nothing but a scrape, but, bent over looking at her knee, she turned toward me and said “Can I get some prewrap?”

I whirled around so the head coach, who was running a hitting drill, could hear her query and tell her where to find the first aid kit, but as I turned back toward her, she said again, “Do we have any prewrap?”

But that’s when I realized she was talking to me. It was the first time I had ever felt like a coach! I thought about how monumental a moment it was for me, and wondered when it had happened for other coaches…Wooden, Kryzewski, my dad…but then I realized she was still looking at me. Oh yeah…she wanted prewrap.

So I grabbed the coach’s office keys and rummaged through her drawers looking for that sticky, foamy, stretchy stuff so she could wrap her knee and prevent the blood from seeping into her kneepad.

But I couldn’t find any! Great…I finally feel like a coach, and I can’t even come through in the most minuscule medical way possible…

I took her something that was wrappy and opened it up. It was a weird gauze-like thing…no sticky. She said don’t worry about it, so I ran it back to the office and decided to take solace in the notion that while I couldn’t deliver like a coach, at least I had the respect of a coach…that’s worth something, right?

But then I saw it! The first aid kit! It was on the sideline!

I ran to it and threw open its lid and there was a roll of prewrap right there on top! (Imagine this sound)

I ran over and tossed it to her. She wrapped up her knee and gave it back, and just like that, I was a coach…

Bolstered by my newfound (internal) title as a coach, I walked into the gym Saturday and did the most efficient scouting job you can do on a team when all you know is the team’s name (Northside).

I built up a database of serving tendencies (#7 – short, #4 – cross-court, #10 – down the line, 9 – jump) and watched #6, their best hitter. After an early block, she tipped it over every time. I told Coach Cochran and she yelled it to her players for coverage. She even wrote it down in her notebook!

And every time a server came in, she turned to me. “Seven, short,” I’d say and she would yell to her back line to move up.

We won and play tomorrow again at home, in case anyone is wondering, bringing my career varsity volleyball assistant coaching record to 5-2.