Let me begin by saying how awesome it was that my hair poll received 41 votes while my poll about my graduation chances garnered just 28. It’s almost as if my readership understands where my priorities lie (I’d also like to take this opportunity to rub it in the faces of the 57% of voters that I did, in fact, graduate in December. Boom!)

So that left me with a dilemma. While 90% of readers (with Me, Myself and Ty included) felt I needed a haircut, the drive-to, payment for and immediate freakout part of haircuts drives me crazy. So what to do?

Well I had several volunteers that wanted to cut my hair for free. Mostly girls that wanted to try their hand at cosmetology, but I was open to it because if it looked terrible, well I had to get a haircut anyway and that would just press the issue.

But after Halloween, (when I needed my golden locks for my pirate costume) there were no true takers. I couldn’t get anyone to cut it…that is until my final weekend as an undergraduate.

I took that weekend to fly through the entirety of a college experience in 72 hours. Call it a collegiate microcosm of accomplishments, wherein I received two misdemeanors Friday night (Details to come following my Jan. 21 court date 🙂 ), got super drunk Saturday night and stayed up writing a paper so late Sunday night I saw the sunrisefrom D.H. Hill. It was a pleasure.

But that Saturday night was a doozy even among debauchery nights in my life: I let one of Richard’s friends give me her haircut. That wouldn’t be a big deal, if her hairstyle couldn’t best be described as an A-line bob with puppy dog ears. 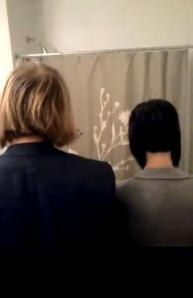 I'm the one on the left, haha. Notice the puppy dog ear-like appendages coming out of the side of my head.

If you’d like to waste a couple minutes of your life, you can tilt your head 90 degrees and watch the finishing touches on my “Tracy” haircut, or you can just take a look at the picture to your right.

What next? Well my A-line received mixed reviews, but to me, it was freeing.

It reminded me of the episode when Topanga cuts her hair to show Cory that looks weren’t important…except it actually worked for me (She freaked out).

I was so positively imperfect with my Rihanna-looking do that I just really didn’t care. It was nice, a vacation from myself, as it were.

But all vacations must come to an end, and so tonight, this Boy Meets World scene inspired me:

So it’s gone. It will be back, don’t worry, but after leaving it long for so many years, it was time for a change. (Plus split ends were catching up with me).

I look forward to the shocked faces from friends in the coming weeks, and while I already miss my hair, sometimes it’s time to reinvent yourself…ourself…all of us here herein together.