PART THREE of a three-part series
PART I PART II

When he was in college, William Fay got into a scrape of some sort. I’m not really sure what it was, but I choose to pretend it was first degree trespassing and larceny.

After getting through the legal issues, Fay was convinced he wanted to go into criminal defense and went to law school.

But that may not be the coolest thing about his firm: It proudly boasts “Hablamos Espanol” almost like it’s the firm’s ad slogan, choosing to represent members of the Hispanic community in and around Raleigh.

These things (and Daniel Ellis’ suggestion) were what led me to consult Fay about my, uh, “run in with the law.”

He told me that there was a First Offender’s program in North Carolina, whereby I would pay $200 plus court costs and be assigned 75 hours of community service OR I could hire him, do 30 hours in advance of my court date and he could (likely) get the charges dismissed.

It’s important to note that the business that owns the property which was larcenied and trespassed on hasn’t existed in years, meaning any trial wouldn’t hold up and I could have gotten this dismissed through a tiresome and very court visit-filled manner, but I just needed to get that spot off my record.

Fiscally the FO program made the most sense, but there’s just something about having that Get Out Of Jail Free Card in your back pocket that sometimes makes you want to roll the dice, you know?

I hired Will and he hooked me up with the Helping Hand Mission on Rock Quarry Road where I began one of my most interesting and time-intensive solo missions ever.

First, a little about Helping Hand: It’s a warehouse that acts as the flagship distributor for a number of other missions across the county.

Essentially, it’s  a gigantic building with everything anyone in Raleigh has ever donated in it.

END_OF_DOCUMENT_TOKEN_TO_BE_REPLACED 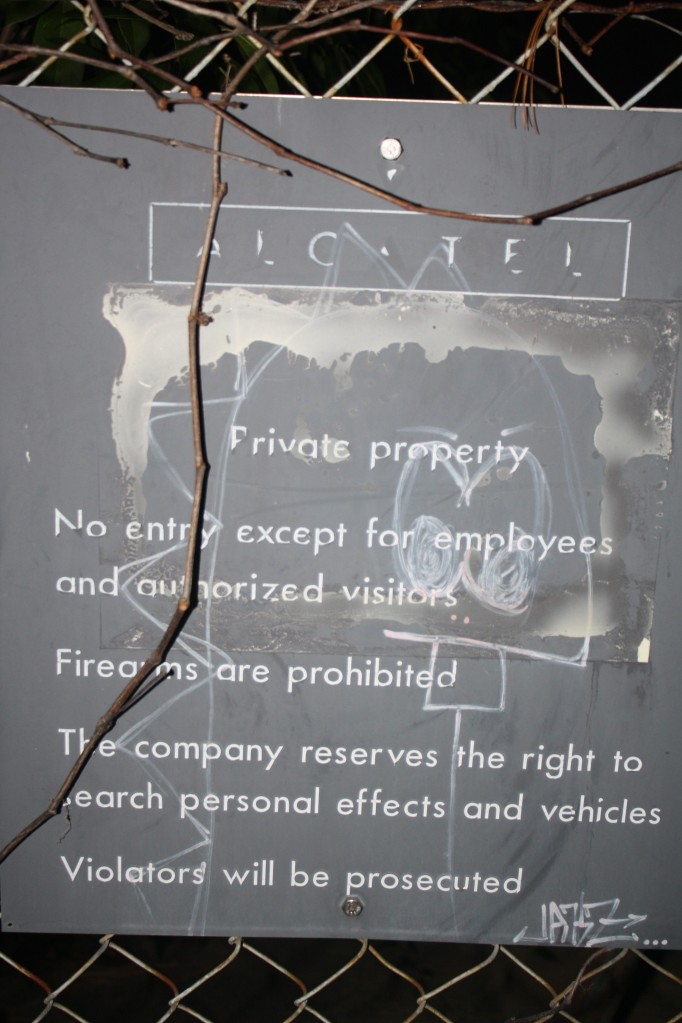 PART TWO of a three-part series.
PART I PART III

Hidden in the shadows less than 100 yards from Trader Joe’s on Wake Forest Road there is a building.

It’s much more than just a building, actually. It’s a complex the size of a high school or small hospital.

The complex is an abandoned communications research facility that was once known as Alcatel.

Yes, I realize that name evokes Alcatraz imagery and yes that was one of the reasons we were so excited about exploring it.

Anyway, this enormous building has been a locally-famed urban exploration spot for years. We had heard stories of subterranean tunnels and hallways that went on forever.

We also knew that this abandoned area was a hotbed for criminal activity of the drug sort, plus a common home for the homeless, but choosing a weekend when the temperature was about freezing assured that we would be alone in Alcatel.

And so we went. Daniel, myself and his girlfriend who will be nameless in this blog until I’m told differently.

This wasn’t our first ro-day-o, so we scouted the area for a decent hour before finally settling on a parking spot where we left the van and headed behind the facility. We opted not to park in the nearby shopping center to avoid any “Imperial entanglements,” but as you’ll find out later, our spot in the loading area of the complex was mine and Daniel’s fatal mistake.

Well, not really fatal. Nobody died. Just let me finish.

END_OF_DOCUMENT_TOKEN_TO_BE_REPLACED

PART ONE of a three-part series.
PART II PART III

So for those of you who don’t know, DanielEllis is quite possibly the greatest guy ever.

He also happens to be as badass as they come.

This transition is important because if you had told me four-and-a-half years ago…no scratch that. If you had told me last semester that of all the law-bending, debauchery-filled things that I’ve done in my college career, the one that would lead to my first police encounter would be because Daniel Ellis told me to do it, I would have told you that was as improbable as me getting cited for larceny and trespassing.

And I would have been right.

Anyway, to the story at hand: It’s a commonly-known secret (oxymoron, yes) that there is a labyrinth of steam tunnels below

N.C. State’s campus. There are various blogs that have chronicled exploits within the university’s netherworld  so I won’t take away from their adventures by discussing it further.

Daniel and I (and a number of others who I’ll mention if they’d like to be forever connected to this blog confession of wrongdoing) had already conquered the tunnels. Steam and graffiti and beer and the steam plant…all of that had been accomplished prior to Mr. E’s senior year, so it was time for a new challenge.

Daniel’s network of friends extends across all demographics and across the entire southeast, so it wasn’t long before he tapped into his sources and found a new place for us to explore.

The plans were made, the crowbars were purchased and a date was set.