This part actually contains a bit of a spoiler for Battlestar Galactica, so for any readers who haven’t seen the show, I have the following message: Stop reading this blog post right now and go watch it. It’s on Netflix. Don’t worry, this post will still be here when you get back.

I had told myself I would watch an episode of Battlestar Galactica before interviewing him. 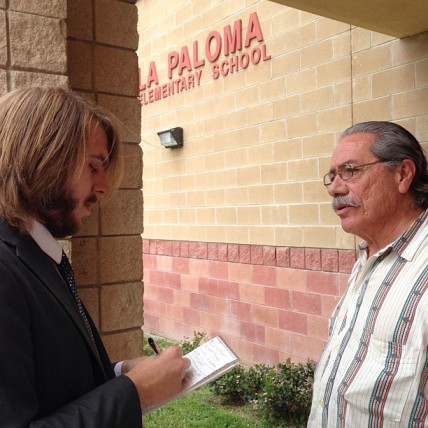 Or that I would watch Stand and Deliver, or something. Just as a fun addition. A way to make the moment that much more memorable when I shook his hand and interviewed him.

I got home that night and found Battlestar on Netflix.

Within the first episode, I was hooked. I watched the last of the human race, led by Olmos, flee from the Cylons while my digital clock counted down the hours until morning when I would ride to San Benito to interview him.

It was wild stuff.

I woke up the next morning and hurried as quickly as I could to the elementary school where he was due to speak to 5th-graders and found myself in the media center with my photographer and 30 kids, all watching scenes from Selena on YouTube.

It was obvious that a movie following a young Hispanic girl from childhood to stardom was a better way to connect with these 5th-graders than discussing a movie about advanced mathematics or a science fiction television series.

This one shot up on the screen and I found myself as entranced by it as the children.

And then (at the 1:01 mark of that video) he danced his way into the room.

Olmos led with a joke about how he played Selena’s boyfriend, not her father, insisting “that fat old guy” on the screen wasn’t him.

It was amazing how his gravelly voice somehow had a deliberate warmth to it when he spoke with the children, who peppered him with questions as part of a question and answer session. They had obviously been studying Olmos’ life, because they asked him questions about his childhood as if they had known him growing up.

They asked about him playing baseball as a child (he owned the state batting title in California as a high schooler) and about his foray into the music industry ahead of beginning an acting career. They also must have read somewhere that his favorite game was Monopoly, because they all acted a bit surprised when he told them it was chess.

“I’ve gotten turned off to it,” he said of Monopoly. “Especially recently.” (Me too.)

He talked about how difficult it was to film “Selena” because he knew her personally and production on the film began just 14 months after her death. He said he knew the movie was true to life because Selena’s real-life father was on the set at times, and between takes he could be seen crying.

“When we cut, her father was in heaving sobs looking away from us,” Olmos said.

He talked about his time as a batting champ in California, the oft-told story of how he nearly stuck with baseball but followed his passion for performance into music and later acting.

What he talked about with those 5th-graders truly resonated within me, though.

He explained it the kids in the realm of personal hygiene: No one likes to brush their teeth, he said, but we do it every day. Why, then, can’t we do the things we’re most passionate about every day?

“I learned to do the things I loved to do when I didn’t feel like doing them,” he said of his path to stardom. “None of us really like to brush our teeth, but we do it because we have to. You can do anything seven days a week that you love to do.”

I remember looking away from him several times and staring long and hard at the elementary school library books on the shelves I was standing between.

“He’s so right,” I thought. “But what does it mean that the same message that he’s sharing with 5th-graders is resonating with me?”

Olmos asked one of the kids what he was passionate about.

“And what would happen if you practiced guitar everyday,” he asked the 5th-grader.

“I’d be the new Slash,” he said amid giggles from his classmates.

“I don’t know,” Olmos said. “You might be better than Slash.”

(Timeout: That kid knew who Slash is. The world is gonna be OK.)

He sidestepped into his ancestry talk by explaining that he had to work hard (seven days a week) at acting because he didn’t look like most movie stars at the time.

“I do not look like Tom Cruise or George Clooney,” he said. “I don’t have the face that belongs on the big screen, so how did I get it there? They didn’t write roles for Mexican-Americans. They still don’t. I have to write them myself.”

And now that his face is up there, they can’t stop him, he said.

He explained to the children that there was no difference between them and him, noting that most of them were Hispanic, meaning they were direct descendants of people who came to the area 40,000 years ago.

That, he said, means that as Latinos, there is a bit of everyone in them: Asian, Caucasian.

He pointed at Paul, my Asian photographer and said there was no difference between them. That parts of each other were from the same place.

And then he looked me, the only Anglo in the room, dead in the eyes, pointing at me as well.

There I was, still sleepy from watching the pilot episode the night and looking straight into Adama’s eyes.

It was almost like Paul and I were props in his presentation, since it is so rare to find Asians or Anglos in the Lower Rio Grande Valley, I said later.

He shook both our hands as we filed out ahead of him, me aiming, still, to get a moment to speak with him about his trip for my story.

He stood outside the front door of the school with me, where parents, there to pick their children up for doctor appointments and the like breezed by, unaware they were walking past an Academy Award nominee.

After I dispensed with the CASA-related questions, I did my best to hit on all of the topics my fellow reporters and I had agreed upon the day before: Battlestar and How I Met Your Mother being the most important.

“No other program has been invited to go to the United Nations,” he said of Battlestar Galactica, noting how significant the show became in its handful of seasons.

He even pulled his glasses off. THE glasses. As in the ones Olmos wore as William Adama in the show.

“These are the glasses I used for five years,” he said, wiping them off on his shirt as if talking about them had made him notice a smudge.

They were actually his that he brought, he explained.

“Oh those are the ones you used as Commander Adama?” I asked, stumbling over his response in which he confirmed that, yes, those were the glasses he used as ADMIRAL Adama.

“Hmm,” I thought. “I guess he gets a promotion later in the series. Dammit. Now you’ve slipped up.”

“I thought they looked kind of like antiquated,” he said, noting that he felt it would be good for a future-themed television show. “But it turned out we were 150,000 years early.”

He then looked at me and said: “I hope I didn’t spoil it for you.”

“No, that’s fine,” I said, immediately disheveled and unwilling to admit I had only watched a single episode. “But if anyone is going to spoil it for me,” I backtracked. “I’m glad it’s Comm-Admiral Adama.”

Want more Olmos? Check out more from my interview with him here.