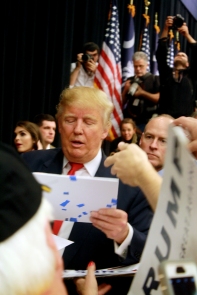 MYRTLE BEACH, S.C. — Speaking a day before he won the South Carolina primary, Donald Trump began listing off a number of prized states typically considered out of contention for Republican nominees.

“I have a chance to win New York,” Trump said. “Can you imagine? If you win New York it’s over.”

Trump may have been overestimating his popularity outside of Lower Manhattan, but New Jersey Gov. Chris Christie’s endorsement of Donald Trump Friday leaned support to the notion that the real estate mogul may be favored in the Garden State, where his name is still synonymous with Atlantic City.

“I’ll win in New Jersey. You know that,” he told supporters inside the Myrtle Beach Sports Center Feb. 19.

Trump does appear poised to win the New Jersey Republican primary in June, but no Republican since Vice President Bush has won the state in the general election. George W. Bush came closest in 2004, earning 46 percent of votes cast.

With Trump’s delegates stacking up and no guarantee that a rival will slow him, the Republican frontrunner is already pointing out the structural limitations of the GOP, claiming he could eliminate the Republican Party’s “tremendous disadvantage” through his celebrity, which could attract “crossover votes.”

“I’ll win Michigan,” he added. “I’m always talking about cars. That’s not even a state that Republicans talk about.”

“The Silent Majority Stands With Trump”

After stringing together a few topics in the political universe; the opening of Carrier and Ford plants in Mexico, Chinese currency manipulation; Trump started in on Veterans Affairs.

“We’re gonna get to work,” he said, looking out into the crowd, reading aloud a campaign sign held by Mike Waters saying “I’m ready to work on the wall.”

Donald Trump’s improvised candidacy: In Myrtle Beach, he took his cue straight off a sign held by Mike Waters, capitalizing on anti-immigrant sentiment in Horry County, where unemployment is high.

The crowd leaped to life as Trump mistook the sign as a critique on Wall Street.

Trump assured the crowd four more times that he would build a border wall along the United States’ border with Mexico before explaining he had initially thought the sign was about wanting to work on Wall Street. 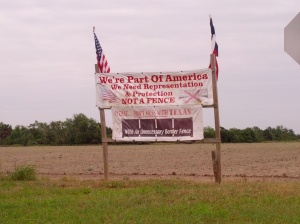 On the border: Landowners in South Texas continue to fight the border fence, which they say doesn’t work.

Trump seized on the moment to respond to criticism from former Mexican President Felipe Calderon, who suggested in interviews that the real estate mogul’s “stupid wall” would not work, pointing out that immigration from Mexico to the United States has slowed to a trickle.

“We’re gonna build the wall, now, ten feet higher,” Trump told a cheering crowd. “We’ll go so high that if they get up there, they’re not gonna come down.”