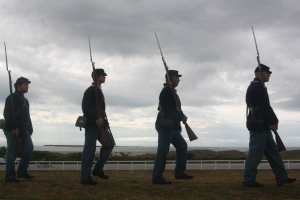 The sensation first came about late Friday night: Was I still walking the line of first-person journalism or was I now reenacting alongside my sources?

I was dressed in full Confederate garb, with the only evidence I wasn’t in the 19th century in my hand: a sweating can of PBR.

Hell, thinking back, the 1862 siege my comrades were reenacting was 30 years ahead of the very blue ribbon that won Pabst the right to its three-letter acronym.

I was standing on the high wall of a fort built centuries before. The War of 1812 had revealed the weaknesses of North Carolina’s maritime defenses, along with a handful of pirates (including Blackbeard).

The fort was erected to defend Beaufort, a tiny port the tiny state in the tiny country thought mattered before the Civil War. It turns out the Union could take the fort in less than a year in an effort to cut off the Confederacy’s supply lines, but still wouldn’t think enough of North Carolina to launch a full attack to end the war.

Hell, Sherman burned the beautiful city of Atlanta to the ground and left a 60-mile-wide path of destruction to Savannah, stopped and then continued up to my hometown to cut the railroad track before neglecting to burn our museum, university (fucking goddamn UNC) or anything of true value to the ground. We were viewed as a “reluctant” state. Driven to secede only because one day we awoke to find ourselves surrounded by the CSA on all sides. Yes, we still have our museums, our history and (goddammit) the University of North Carolina at Chapel Hill, but there’s some courage the state must envy in South Carolina – our sister to the south that decided first and foremost that it didn’t need the Union anymore.

The assignment was easy enough: The connections between Fort Macon and Goldsboro/Wayne County were myriad – make them for the Sunday front. (View my video report here)

Members of the Goldsboro Rifles group were among the first to claim the fort from the Union in 1861. The only artillery group raised from Wayne County was there in April 1862 when the Union laid siege to it.

On top of that, there was a group from present-day Wayne County that was reenacting that artillery group for the 150th anniversary of the siege. Nevermind the fact that the local community college crafted the cannon carriages for the fort last year, saving the state park enough money to purchase fireable cannons which made the reenactment possible.

Yeah, it was that kind of assignment.

But like most assignments, I dedicated myself to it completely and utterly.  I do it with library programs, planning commision meetings, whatever. If you don’t convince yourself that every story you write is the gamechanging, life-shattering, most epic article of your life, then you go crazy. Or maybe assuring yourself that every article is that is how you drive yourself crazy. I don’t remember.

Anyway, a friend took care of my lodging and my other contacts in the reenactment group found an extra uniform. A straw hat completed the uniform of a Confederate-leaning reporter. In my head I pretended I was with the Charleston Mercury – an era newspaper I consulted during one of my failed attempts to pass a Civil War class in college.

What I was awakened to, sitting on that fort wall, was a new culture. These men were not crazy, no matter how badly I wanted to take notes on their insistence to fight a war that had been won (in the name of liberty, justice and equal treatment for all) 150 years earlier – no they were history buffs that took their craft seriously. Just mention the battle of anything or general whats-his-name. They know their shit.

No, this was not the group of idiotic, hell-bent southerners that most imagine reenactment groups to be. They were clever individuals, completely sold on historical accuracy.

I know they aren’t all, necessarily, this intelligent, but reporting what I observe is the jist of my job.

They knew their shit. I can’t say it enough.

And so when they offered me a uniform, I never hesitated. And so I spent the evening, at my paper’s expense, experiencing everything that those reenactors did.

Dressing in period gave me complete access to everything going on at the fort. I carried my camera in a period sack and was able to pull both my media card and my reenactor card simultaneously. It was like telling the parking attendants to “Fuck off” in two different ways at a basketball game: “Not only am I covering the game, but I’m also playing in it, so get out of my way.”

That night, I was dressed in period Confederate clothes drinking PBR from cans. By the next day, I was drinking that PBR from a tin mucket I had bought.

There were cannons and Confederates all over, with Union soldiers camped out just over the hill. I drank myself drunk and slept beneath a cannon and the stars. I yanked down the Stars and Bars and helped raise the Stars and Stripes, but no matter which side I was on, as a journalist being paid to dress up and drink on the beach, I won. 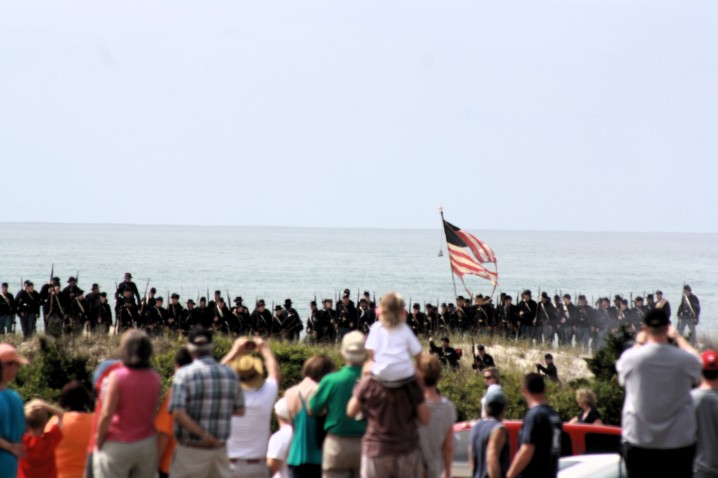